Nepal, a landlocked country in South Asia, is a unique destination. It has everything that you would expect from a travel destination, but it also has many surprises that make Nepal an interesting and unique place to visit.

Nepal is a small country with a population of only 28 million. However, due to its location and size, Nepal is a travel destination that attracts millions of visitors every year. The capital city of Kathmandu is the largest city in the country and is the centre of tourism. Kathmandu is known as the ‘City of Temples’ and has numerous temples scattered throughout the city.

The culture of Nepal is very diverse. The Nepalese people are a Hindu majority, with a minority of Muslims, Christians, and Buddhists. The Nepalese language is Sanskrit based and is called Newari.

The history of Nepal is interesting and has been influenced by various cultures and religions over the years. In ancient times, Nepal was part of the Indian subcontinent. The first evidence of human habitation dates back to around 4,000 BC. At that time, the region was inhabited by hunter-gatherers. 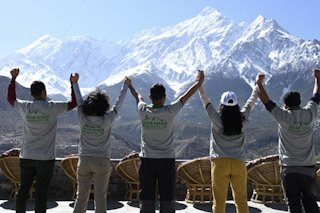 The early settlers were pastoral tribes who raised sheep and goats. These tribes had no written language and their history was passed down orally. They were later joined by the Aryans, who migrated from Central Asia. The Aryans brought with them their own language, which was later replaced by Sanskrit. The Aryans were followed by the Muslims, who invaded the area in the 12th century.

They built several mosques and madrasas, which still exist today. The Hindu rulers of Nepal also played a significant role in the history of the country. During this time, they built many Hindu temples, which can be seen throughout the country. The Hindu religion is the dominant religion of Nepal.

Nepal has many natural attractions. The mountains provide the backdrop for the city. The Himalayas stretch along the border of Nepal and India. Mount Everest is located in Nepal, as is Mount Lhotse, the world’s fourth-highest mountain.

The mountain is often referred to as the ‘Everest of the Himalayas’. There are many other mountains and peaks in Nepal, including Langtang, Gosainkund, Gosaikunda, Ganesh, and Manaslu.

The climate of Nepal is tropical, with warm summers and cool winters. Temperatures vary depending on the altitude and elevation. The highest point in Nepal is Mount Everest, which is at an elevation of 8,848 meters.

The lowest point in the country is the sea level. The average temperature in Kathmandu is 26°C, with an average humidity of 70%. The best time to visit Nepal is during the months of April to September.

Nepal provides many cultural experiences for travellers. The most famous cultural attraction is Durbar Square in Kathmandu. The square is the site of the former royal palace, which was destroyed during the 16th century.

Today, the square contains numerous temples and palaces, which have been converted into museums. Other cultural attractions include the Buddha Museum, the National Museum, the Boudhanath Stupa, the Swayambhunath Temple, and the Pashupatinath Temple.

The cuisine of Nepal is very diverse. Nepalese food includes bread, sweets, soups, curries, and dumplings. Some of the most popular dishes include momo (dumplings), phirni (rice pudding), kitchari (mixed vegetables), and pitha (sweet bread). The staple food of the Nepalese people is rice.

Travellers looking for adventure should consider Nepal. It offers many outdoor activities and rich culture. Travellers will enjoy visiting the cities and villages, as well as exploring the mountains and forests.

Nepal – A City of Contrasts

Kathmandu, Nepal is a city of contrasts. It has a rich history and culture, but it is also a modern city with vibrant nightlife. It is a great place to explore both the past and the future. The city has a lot to offer tourists from all over the world. It is a city that will never lose its charm.

Kathmandu, which means ‘the beautiful city, is the capital of Nepal. It is located at an elevation of 1,400 meters (4,600 feet) above sea level in the eastern part of the country. It is also known as the “City of Temples”. The name “Kathmandu” came from the Sanskrit word “Kathmandu”, which means “city of the monkey god”.

Kathmandu is a cultural melting pot of India, China, Tibet, Nepal and Bhutan. It has been the centre of trade for centuries. Today, it is the most important cultural and economic hub of Nepal. There are many temples in Kathmandu. Some of them are very old and have been built by various dynasties.

Kathmandu is some of the most impressive temples in the world. They are made from sandstone and have a mix of Hindu and Buddhist architecture. Many of the temples have been converted into museums. These include Patan Durbar Square, Boudhanath Stupa, Swayambhunath Temple and Pashupatinath Temple.

Patan Durbar Square is the main square in Kathmandu. It was originally the royal palace of the Malla dynasty. It is one of the largest squares in Asia. It has a huge statue of Buddha and a number of other statues and monuments.

It is the oldest temple in the valley. It is also known as Monkey Temple because of the large number of monkeys that live around the temple. Pashupatinath Temple is the most important Hindu temple in Nepal. It is dedicated to Lord Shiva. It is located at the bank of the Bagmati River in Kathmandu.

The streets of Kathmandu are full of life. The locals are friendly and they love to share their stories and experiences with visitors. The nightlife is exciting and there are plenty of bars, clubs and discos. There are also lots of restaurants where you can enjoy authentic Nepali cuisine.